In recent years, neural network based approaches (i.e. deep learning) have been the main models for state-of-the-art systems in natural language processing, whether that is in machine translation, natural language inference, language modeling or sentiment analysis. At the same time researchers have asked themselves what kind of linguistic information these neural networks are able to capture. Answering this question is not a trivial undertaking: state-of-the-art model’s are usually multiple layers deep with non-linear transformations learned through billions of mathematical operations. The benchmarks or downstream tasks used to assess the performance of these models, however, “require complex forms of inference, making it difficult to pinpoint the information a model is relying upon” (Conneau et. al, 2018).

An early usage of probing tasks can be found in Shi et. al (2016) Does String-Based Neural MT Learn Source Syntax? There they trained two NMT models (English -> French and English -> German) and then used a separate corpus of 10K sentences annotated with five syntactic labels (see image below). 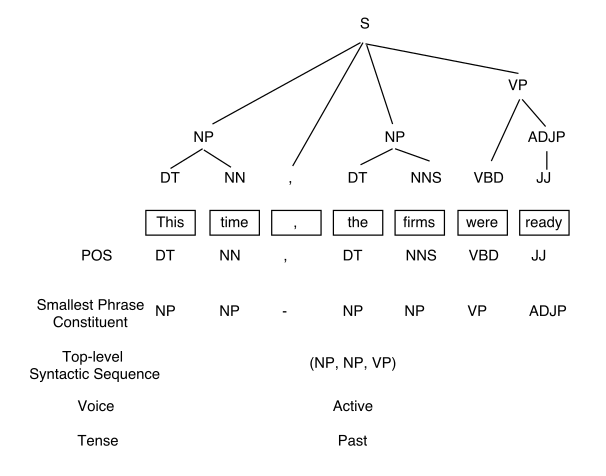 Using the NMT models, they convert the sentences to encoded representations and use them to train a logistic regression model for each syntactic label. Looking at the results of these probing classifiers, the authors conclude that “both local and global syntactic information about source sentences is captured by the encoder” and that “Different types of syntax is stored in different layers, with different concentration degrees.” This illustrates the power that probing tasks can have in explaining what kind of linguistic information and how it is captured in neural network based architectures.

What role probing tasks and new probing frameworks will have in evaluating NLP systems in the future remains to be seen. However, the sort of insights they are able to give into NLP systems seems promising.